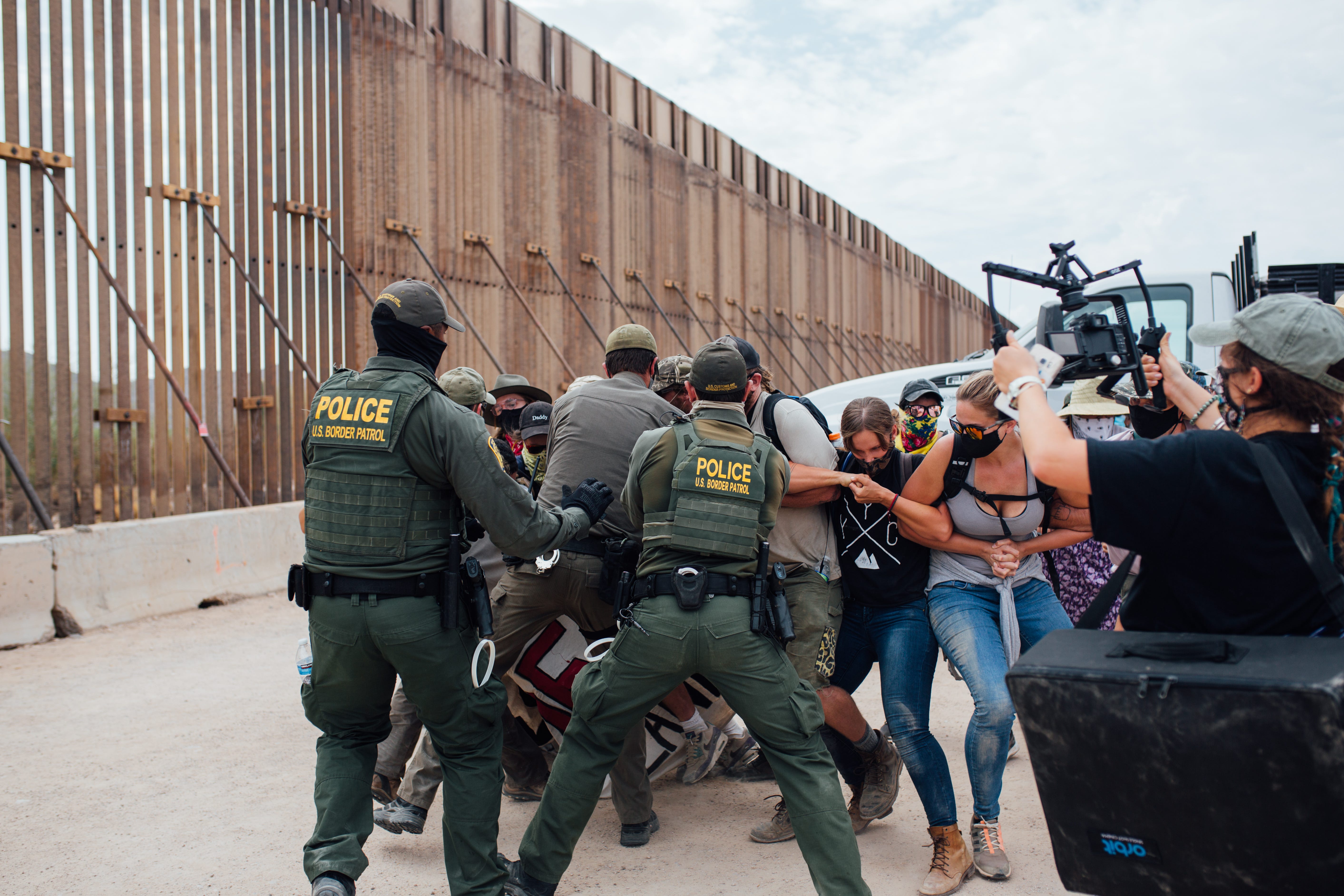 An hours-long standoff between Tohono O’odham protesters and federal authorities at a border wall construction site ended Monday afternoon with shoves and pushes as border officers and park rangers physically cleared the area.

The 7 a.m. protest was against a stretch of replacement fencing in the Quitobaquito region of the Organ Pipe National Forest in southwestern Arizona, an area with a spring that the O’odham people consider sacred.

After a blessing and a prayer, organizers with the O’odham Anti Border Collective led a group of about 25 protesters from Tucson and other parts of Arizona to the construction site at the U.S.-Mexico border. They carried a banner that said “Borders = Genocide, No Wall on O’Odham Land.” Many of the onlooking construction workers recorded the action on their cell phones.

The concrete for the barrier installation uses nearby groundwater that has begun to take a toll on Quitobaquito and the sacred spring.

The work came to a halt after protesters set up camp at the site.

By the afternoon, National Park Service officers had arrived on the scene and warned the group to move because of safety concerns.

The area is closed to the public, a park ranger said, because of the construction and heavy equipment.

Three more warnings followed, with the group standing its ground. Protesters talked among themselves. Some began to sing O’odham prayer songs as sage was burnt by the organizers. The temperature at 1 p.m. was 106 degrees.

The standoff between the protesters and the National Park Service continued until 4 p.m. when a caravan of 25 Border Patrol agents arrived on the scene. Some carried paintball guns; others AR-15s.

The protesters interlinked their arms to form a human barrier as the Border Patrol agents approached. The park rangers moved towards the protesters and yanked a woman from the human chain. The physical altercation escalated when a ranger drew a stun gun.

Through a bull horn, the O’odham organizers began to talk at the Border Patrol agents.

“We are dealing with generational trauma because of your abuse,” a second protester said.

“We are done. This is it. You don’t control the border, you terrorize everyone here from Texas to California and everywhere in between,” another added.

At 4:42 p.m., the Border Patrol agents and two park rangers rushed the protesters, knocking people to the ground as they struggled to hold on to each other. Pushes and shoves came from all directions with border agents trying to pull apart the interlinked persons and protesters pushing them away.

Officers with paintball guns pointed them at protesters remaining as the agents moved the protesters off the construction site.

No arrests were made and but some protesters appeared to have scrapes and possible bruises.